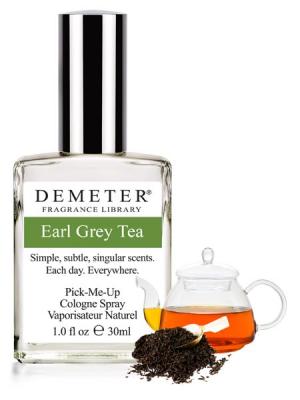 Our Earl Grey Tea is a blend of fine black China teas and the natural oil of bergamot, a pear-shaped citrus fruit. It is this same oil with its distinctive aroma that is at the heart of Demeter's Earl Grey Tea cologne.

The legend is that a British diplomat sent as part of a trade delegation to China in 1834 by the second Earl Grey, saved the life of a mandarin's son who was drowning. The grateful mandarin gave the diplomat a recipe for a blend of tea to present to the Earl. The second Earl Grey passed it on to his tea merchant, who used the recipe to recreate the blend for the Earl's private use. The tea was so well received among the Earl's guests that they began asking where they could buy the tea. The Earl gave it his name, and the rest is history.

by C.S. Lewis
You can never get a cup of tea large enough or a book long enough to suit me