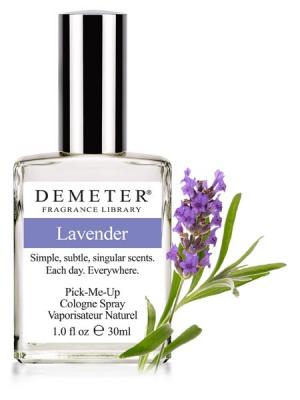 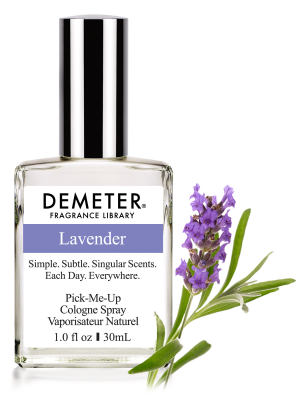 Lullaby and goodnight. This scent says chill out. Demeter's Lavender is powdery, soft and enveloping. Like most Demeter florals, it is inspired by the living plant, and is not some reductive, perfumed version of Lavender.

Lavender is a shrubby plant indigenous to the mountainous regions of the countries bordering the western half of the Mediterranean, and cultivated extensively for its aromatic flowers in various parts of France, in Italy and in England and even as far north as Norway. It is also now being grown as a perfume plant in Australia. The fragrant oil to which the odor of Lavender flowers is due is widely used in perfumery, and to a lesser extent in medicine. The fine aromatic smell is found in all parts of the shrub, but the essential oil is only produced from the flowers and flower-stalks.