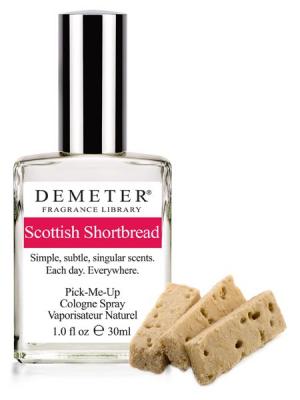 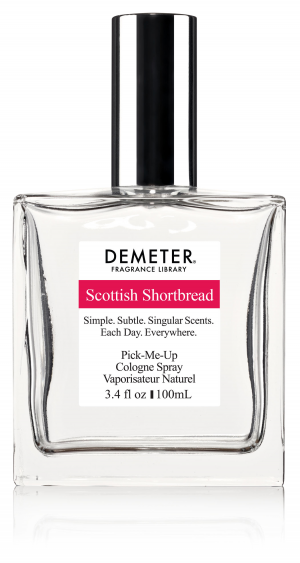 Butter, eggs, more butter; what could make for a better scent??? According to Jennifer Harvey Lang of Larousse Gastronomique: "Shortbread ia...A biscuit (cookie) rich in butter, which is served with tea and its traditionally eaten at Christmas and New Year. Originating from Scotland and traditionally made with oatmeal, it is now made with wheat flour...Shortbread is usually baked in a large round and served cut from the centre into triangles; it is a relic of the ancient New Year cakes that were symbols of the sun." The history of Scottish shortbread is interconnected with the history of dairy farming and butter making in the British Isles during the Medieval Age: "Butter was the other principal milk dish [cheese being the other]. The manner of making is had changed little since Pliny's day...In other branches of cookery butter was an enricher, the accompaniment of cheese in herbolaces or with macaroni; of eggs, milk and sugar in the filling for a flathon; of plain or fancy breads in pain perdu or rastons. For short pastry and cakes, it was at first an alternative to fresh cream, but eventually superseded it, for butter had a more highly concentrated fat content, and was more easily stored...Nevertheless butter appeared in a relatively small proportion of the dishes in medieval recipe books, which were written mainly for and by the cooks of the nobility. It was only in Tudor times that an emerging middle class, which did not despise butter as the food of the poor, began to use it liberally in every possible sphere of cookery, setting a trend that was to last for some two hundred years." ---Food and Drink in Britain: From the Stone Age to the 19th Century, C. Anne Wilson This explains why the first shortbread recipes date only back as far as Elizabethan times.