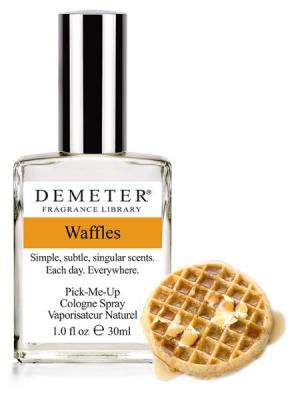 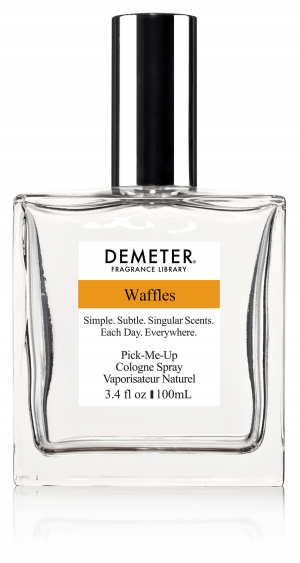 Demeter's Waffles is a balanced combination of the waffle itself smothered in butter and covered in maple syrup-sweet, but not too sweet.

Actually, waffles are as American as apple pie, and like apple pie, are an import. The word "waffle" and probably the food, comes to us from the Dutch "wafel", but the French eat them too, calling them "gaufre" from the Old French "wafla".

Whatever their provenance, waffles have been eaten by Americans since Pilgrim times. Europeans eat their waffles as a sweet course, topping them with powdered sugar, whipped cream, or honey or stuffing them with icing. Americans have occasionally served waffles for dessert - perhaps a chocolate waffle with ice cream - but in general we eat them for breakfast with all-American maple syrup.

At least NOW we do, if we eat waffles at all. But in the Thirties, and before that, Americans ate waffles with virtually anything that could be spooned or poured over their bumpy, golden tops. And we ate them for breakfast, for luncheon, and for supper. If we served them to guests at a Sunday Night Supper, it became a waffle supper, "sure to be a party guests remember," according to the General Foods cookbook "All About Home Baking" (1933). And we made waffles with just about everything: Cheese waffles; cornmeal waffles; coconut, pineapple, and chocolate waffles; gingerbread waffles; banana waffles; cheese and tomato, date, and peanut butter waffles; apple waffles; oatmeal waffles; and prune, bran, apricot, and even pea pulp waffles (which Pictorial Review featured as one of their best recipes for 1927.)