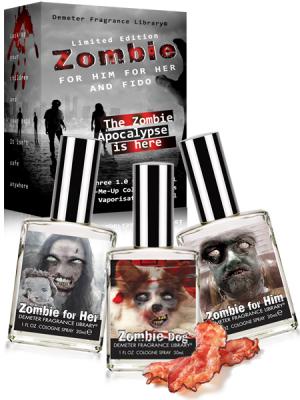 Those pesky Zombies are back again! And now they brought their Zombie Dog.

Now, for a limited time, you can own the complete Zombie Collection in a newly designed Limited Edition set, at a very special price.

ZOMBIE FOR HIM
Death and Decay on the forest floor.  Zombie for Him is a combination of dead and dying vegetation, mushrooms, mildew, moss and earth. Not for the faint of heart, if you still have one.

ZOMBIE FOR HER
Think forest floor.  Zombie for Her is a combination of dried leaves, mushrooms, mildew, moss and earth. And for the feminine touch we’ve added a little bit of dregs from the bottom of the wine barrel.

ZOMBIE DOG
Zombie Dog is more than Death and Decay on the forest floor.  Yes, we have the standard Zombie combination of dead and dying vegetation, mushrooms, mildew, moss and earth.  But Zombie Dog, Man's Best Friend, deserves something more, so much more... SMOKED BACON!

By Robert Bloch
Despite my ghoulish reputation, I really have the heart of a small boy.
I keep it in a jar on my desk.

Fact: Horror writer Robert Bloch (born April 5, 1917) only earned $9500
(before taxes and agent fees) for film rights to Psycho, but the Hitchcock
hit did launch his screenwriting career.